It is with great sadness that we say goodbye to former board member and dear friend, Shawn J. McDuff. Shawn died unexpectedly on Dec. 31, 2017. 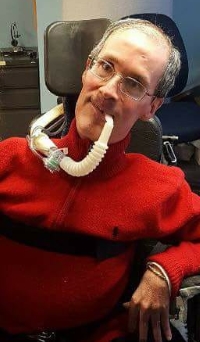 Shawn was a founding board member of the REquipment Durable Medical Equipment Reuse Program, Inc. and served as our treasurer until June 2017.  As a user of DME and long-time Independent living advocate and activist, Shawn was a great fit for our nonprofit, standing by our DME reuse philosophy which emphasizes the principles of consumer choice and control. 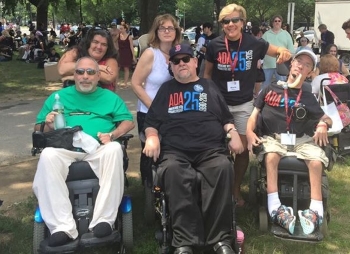 Born and raised in Lynn, Shawn was the son of Joseph and Marie McDuff, of Nahant. He attended Lynn Schools and was a graduate of Lynn English High School, Class of 1986. Shawn earned a Bachelor’s Degree in Social Work from Salem State College in 1990.

Shawn was an avid Bruins fan, and also a fan of the Patriots and Red Sox “in that order.” He had a great smile and a wonderful sense of humor. He was a hard worker and lived life to the fullest. He and his wife, Maria DiScipio, with whom he shared 17 married years, enjoyed taking cruises, dining out, and exploring trendy restaurants and food shows. I jokingly told my husband that Maria must be a bad cook because they ate out so often!

We played Words With Friends. He beat me badly. All the time. He finally took pity on me and… stopped playing with me.

A memorial service is being planned for when the weather is nicer to accommodate those not able to travel in the cold and snow to his wake and funeral.

We will all miss you, Shawn. Rest easy.